Pas' super intelligent deputy president Mat Sabu has apparently picked up a fight with the most influential Chinese newspaper in the country, Sin Chew Daily. 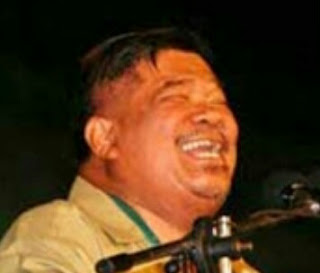 Mat Sabu was today quoted by Pas' Harakah as accussing a Sin Chew reporter who interviewed him as "twisting" his words to make it sound as if, he is an evil Taliban who insists on implementing hudud and chopping off heads and limbs.

The offending Sin Chew article had appeared on the newspaper's frontpage on Monday.

Well, the Sin Chew reporter had actually quoted Mat Sabu as saying that Pas will push for the implementation of hudud  in Parliament via constitutional amendment, once Pakatan takes over Putrajaya.

I don't really see anything wrong with such a report. Mat Sabu is technically the second most powerful man in Pas and it is (was?) Pas' aspiration to implement hudud.

So, what was so wrong with the Sin Chew's report that Mat Sabu went to the extent of accussing the highly respected newspaper among Malaysian Chinese as being "unethical"?

Sin Chew's journalists and editors who are known not to be overly fond of the BN government must had been stumped by such harsh judgement of such a senior Pas leader. Has Mat Sabu forgotten all those supportive articles written in Sin Chew about Pakatan?

Well, Sin Chew people, there you have it. These Pakatan leaders are not really sincere la when they talk about upholding freedom of the Press etc. Anything you all report which turn out not to their liking, and you all will have it from them. You all better understand that, ok? If you think BN is not media friendly enough, just wait until Guan Eng and his crazy friends such as Mat Sabu in charge of this country.

Anyway, as for Mat Sabu's outburst, he actually only realised that he was talking to a Sin Chew reporter after the article was published...I think. He must had thought that he was speaking to a Sinar Harian reporter when he said about pushing for hudud. Sinar's Malay muslims audience would probably see Mat Sabu as being so handsome and pious for bravely upholding Islamic laws. Unfortunately, it was Sin Chew and its Chinese audience would not likely appreciate Pas' hudud stance.

To me, this is a case of speaking with too many tongues in front of too many audience. In front of Malays speaks one thing, in front of Chinese, speaks something else. Now Mat  Sabu claimed that his words were twisted by Sin Chew while the truth is, it was him who twisted and turned his own words till he himself was confused by them.
Posted by BIGCAT at 19:21