True to his no nonsense self, Singapore former premier Lee Kuan Yew made it known to Singaporeans and the world that he is fine without having to respond to rumours about himself. He instead did so by showing up at the republic's national day parade today. He looked frail but was in jovial mood. 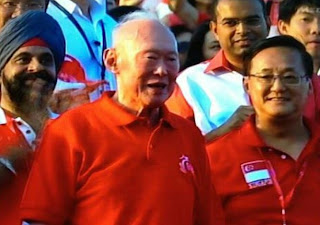 Rumours of Lee's death was rife in the republic since two days ago.

When I heard about it, I had checked with my contacts in Singapore and they had confirmed that Lee was  still alive.

He was however said to be under treatment for various ailments. The 89 year old founding father of modern Singapore was said to be in poor health ever since his wife passed away two years ago.

I had posted about his ailment to refute rumours that he had died.

My sources may had not been very accurate about the degree of his illness and if my posting on it caused any distress, I humbly apologise. Sincerely, I'm glad that Lee is okay. He may not be my favourite person, but I do not wish him any harm or illness.

Now that Lee had proven that he is fine and may still be around for many more years, I wish him and his family the best of health and happiness.

To all Singaporeans, happy national day.
Posted by BIGCAT at 20:14