Malaysia achieved another olympic milestone last night when diver Pandelela Rinong became our first female medalist winning the 10m platform bronze. She is also the first Malaysian olympic medalist from outside the sports of badminton. 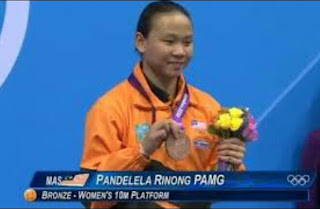 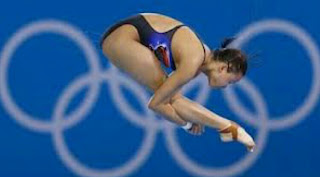 NST reported that "It was a magnificent medal to win, considering the pressure the 19 year old was under after a poor first dive left her in 10th place in the 12-diver field."

The report also stated that, "In fact, had it not been for the first dive - which gave her only 58.50 points, Pandelela could have well won the silver as her final total of 359.20 points was not too far off silver medallist Brittany Broben of Australia's 366.50. China's Chen Ruolin was a runaway winner with 422.30."

Well done Pandelela. Thanks for the cheers.

ps. Please refrain from doing a Manoharan by not commenting that it was only a bronze. Thank you.
Posted by BIGCAT at 12:58