Best day of the year

Raya eve - easily my favourite day of the year. End of puasa and in anticipation of Raya. Most of the family are gathered and the house is abuzz with activities. Very happy indeed.

I'm now just finished having my sahur meal for the last day of Ramadhan.  Just rice and beef curry. Been sleeping at the living room of the family home. It's packed as most of us are already here. It's just like those days when I was young.

Family home now is my sister's house in KL. I had previously written about our kampung house in Johor being sold after my arwah dad passed away. 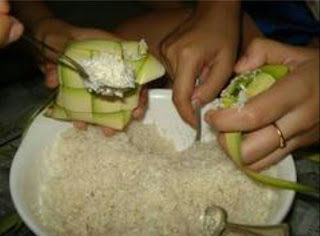 Back then, I always enjoyed the train ride home from my boarding school in Seremban to my little home town in Johor. It was such fun with school friends on the packed train going home for raya. It was then free sitting amd third class coach, but we were happy.

It was with lots of excitement as I took a bus ride from town and then walked the kampung road before greeted by the sight of my arwah mom and dad busy doing raya preparations stuff at the back of our small kampung home. Both chatting happily away in their mother tounge Javanese. My mom and dad were more relaxed about their affection for each other during their old age. It was always fun whenever I hear them teasing each other and enjoyed a laughter together.

As I had previously wrote, my favourite were preparing the kueh raya and cooking of the ketupat on Raya eve with my brothers and sisters. I really miss those days, especially doing things such as cooking the ketupat using firewood that we collected from the nearby rubber small holding. Just the dead branches which had fallen off from the trees. Now it's an offence I think...open burning. My sister normally will try to reenact those days by making sure we have lots of coconut leaves for the ketupat, but of course there were no firewood. Don't want the neighbours to complain about the smoke. The best part was when the ketupat were cooked and hanged on a line by the kitchen wall...so raya like :-)

Oh yea, the bunga api....that was fun too. We don't have much though, just for raya night. No fireworks though. I can't stand the noise lah.

Another one that I miss was having those pelita minyak tanah all over the outside of our home. My dad was the one very rajin in preparing those little lights. He used to fashioned them from empty milk tins. Nowadays they sold the ready made ones at the shops but most people just use electric lampu kelap-kelip to get that festive atmosphere around their homes.

Well, today I am just going to do the necessary and later in the night have a little doa for my parents and an elder brother who passed away when he was a little boy before I was born.

Hope you all who celebrate Raya to have a good time too. Drive home safe. Selamat Hari Raya :-) Maaf Zahir Batin.
Posted by BIGCAT at 06:17