As I was focusing my attention at Pakatan's attempt to derail the Pengerang petroleum hub project,

Pulling out the racial card in Pengerang 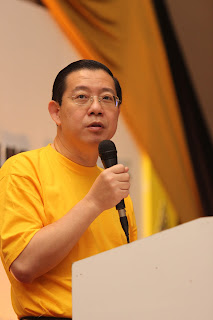 You all can and probably had read it at Helen Ang's

I guess I better congratulate Guan Eng for his achievement. He is probably the first Malaysian chinese politician who had ever achieved that level. To be worshipped as a tokong is indeed no small matter.

Among the Malay Muslims politicians, the only one who has some sorts of similar status is Kelantan MB Datuk Nik Abdul Aziz Nik Mat. Of course his Pas followers do not pray to him as a tokong (that would be syirik...and not win them votes among the true Muslims) but his words are indeed sacrosanct to them.

Here is a sample of Nik Aziz's sacrosanct words -


Note : both video clips had previously been posted in this blog many moons ago :-)
Posted by BIGCAT at 09:08