Does some in Janjibersih wants to "Wage a war against the Yang DiPertuan Agung"?

Lepaking in front of TV watching the Merdeka parade in the morning. Can la, not so bad at all, except that I keep seeing Rais Yatim on the TV screen. Irritating leh. Even DPM Tan Sri Muhyiddin Yassin had to stand behind Rais when PM DS Najib Razak spoke to the crowd at the end of the parade. Over la you, Rais.

Actually, things are not going too well at my office for the past few days, so that I decided not to work today and just spend the Merdeka at home. Work too hard also people don't appreciate, so better I don't kill myself over it.

Last night there were a bit of Bersih thing at the count down of Merdeka. This is an excerpt of a report by pro-Pakatan Malaysian Insider -

KUALA LUMPUR, Aug 30 — Thousands, mainly dressed in yellow T-shirts in a show of support for the Bersih movement, flooded Merdeka Square tonight with others celebrating the eve of Merdeka Day.

Blowing vuvuzelas, they came hours ahead of the 11pm start for the countdown to Merdeka in the historic square where Independence Day was declared 55 years ago.
At 11.05pm, hundreds of supporters greeted the arrival of PAS deputy president Mohamad Sabu as a police cordon looked on. Others there include PKR lawmakers Tian Chua and Fuziah Salleh. 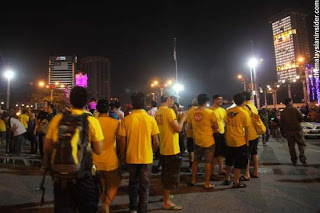 The picture is also from Malaysian Insider.

I went through the report three times as it seems a bit funny. How come Ambiga not around? Since when had Mat Sabu become the leader of Bersih? Well, he seems to be the biggest Pakatan leader at the Bersih thing last night. Hmmm...quite an achievement for Mat Sabu la like that.

Tian Chua and Fuziah also Bersih leaders ka? Why Anwar and Azmin not around also?

Anyway, Selamat Hari Merdeka to all Malaysians who love this country.
Posted by BIGCAT at 11:03