Apparently, the Sin Chew people were very very unhappy about the way Mat Sabu had twisted himself by accusing the Chinese number one daily in the country of twisting his words on the hudud issue.

Issuing a statement over the Mat Sabu's dastardly act was none other than Tay Tian Yan, the Sin Chew Daily's deputy editor in chief, who is quite famous for his articles which were not very friendly at all to the BN government. 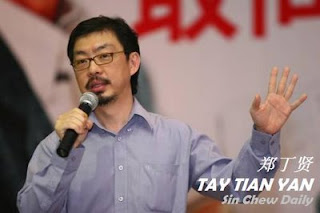 I am cutting and pasting his full statement from the pro-Pakatan Malaysian Insider, so that I wouldn't be accused of twisting Tay's words -

AUG 29 — In an open society, everything is laid out under the sun for public scrutiny.
I personally have nothing against what PAS deputy president Mohamad Sabu has said. On the contrary, I used to have very high regard for his candidness, and his relatively open and pragmatic attitude towards issues.
Such a perception has been reflected in many of my past commentaries on PAS.
This time, we have to really thank Mat Sabu for accepting an interview from Sin Chew Daily, during which our reporter requested him to expound the remarks made by party president Datuk Seri Hadi Awang in Harakah that the party had the intention of implementing the hudud law through democratic process.
Mat Sabu explained, “PAS has decided that it will seek a constitutional amendment in Parliament to implement the hudud law once Pakatan takes the helm of the federal administration.”
Our reporter called him again after the evening edition of Sin Chew Daily hit the street, and wanted to reconfirm with him the content of his statement. Mat Sabu offered to change the tone from “decided” to “had the intention” (berhasrat) to which our reporter agreed.
As a result, some minor changes appeared on the morning edition of the newspaper: “PAS has the intention of seeking a constitutional amendment in Parliament in order to implement the hudud law once Pakatan takes the helm of the federal administration.”
In the meantime, we also interviewed PAS information chief Tuan Ibrahim Tuan Man to get him to clarify the party’s stand on this issue. His response was consistent with that of Mat Sabu and the same was published in that day’s edition of Sin Chew Daily.
We later acquired the official statement of PAS president Hadi Awang on August 13, as well as his August 25 statement published in the party’s mouthpiece Harakah on the implementation of the hudud law.
We later clarified the same issue with PAS secretary-general Mustafa Ali.
Unfortunately, after the report went to print, Mat Sabu denied the following day what he had said, and claimed that Sin Chew Daily had distorted his speech.
We tried contact him with the hope of seeking further clarification but have so far not been able to get him.
It appears that politicians’ customary ways of doing things have been repeated with Mat Sabu. Although this is nothing new in politics, I am still somewhat disappointed. I thought Mat Sabu was a responsible man who would loyally adhere to his principles.
To support our case that we have not misquoted or distorted anyone’s speech, we published the statement Hadi Awang has made in today’s Sin Chew Daily, along with an exclusive interview with Mustafa Ali for public scrutiny.
We have to make it very clear that our reports on the hudud law have not been tailored in any way as to misrepresent PAS or Pakatan but to deliver accurate and essential information to the reading public.
As a public medium, we are in no position to conceal any piece of important information from public knowledge, especially something that involves public interests, and incidents that may transform our society in one way or another.
It is imperative that PAS’ stand on the implementation of hudud law be exposed so that members of the public will be able to comprehend, evaluate and decide on their options.
The worst thing we could do is to selectively hide the truth, glorifying the most beautiful parts and covering up the rest of it.
The most despicable and deceitful way of doing things is to tell one side of the story to the Muslim community, and another side to non-Muslims.
PAS used to enjoy a good reputation and should therefore treasure its own credibility. If the party insists that the hudud law is correct and appropriate, it should then publicly proclaim its political agenda in the same tone, be it to the Muslim or non-Muslim community, and go on to promote and lobby for those issues among the Chinese voters.
That said, the party must make its agenda unreservedly open to all Malaysians. This is the most fundamental way of doing things justly.
Meanwhile, PAS’ allies in the opposition pact must never attempt to create a glamorous illusion among the Chinese community with their own interests and ballots as prime considerations. While political parties have every right to pursue their goals and objectives, they have to be accountable to the rakyat in doing so.
Whether the hudud law is eventually good or detrimental to our nation, once it is implementated, it will stay in effect for generations, even as electoral ballots and political parties fade away.
Malaysians are entitled to the whole truth to make sensible judgements and choices that will shape their common future. — MySinchew.com